Me too. There’s more to it, of course. The bunk bed in question, itself, is a simple affair, but it’s got a dresser built into one end, a desk (with drawers) below, and a matching staircase up the one side (also with matching drawers).

I feel like this garage re-org is the kind of thing that a few of us could help you make short work of.

You are not wrong, sir. And perhaps I’ll plan a wrenchfest of some kind before the end of the year, but it’s looking pretty slim right now. Currently only three open weekends left for me in 2020. Fezzik will be getting re-geared during one of them. And I’m not sure what else will need done on the rest of the house during that time.

Looking forward to having a new place to hangout and hangout with other people.

I used 3" screws to anchor the frame to the wall, then cloned the wall boards by tacking identical horizontals to them with a couple random screws each. 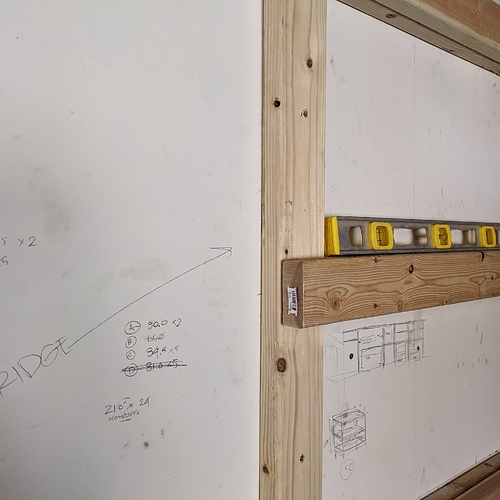 Next, I ran 2.5" screws through vertical uprights into them. Then I removed the cloned front pieces and set them aside. 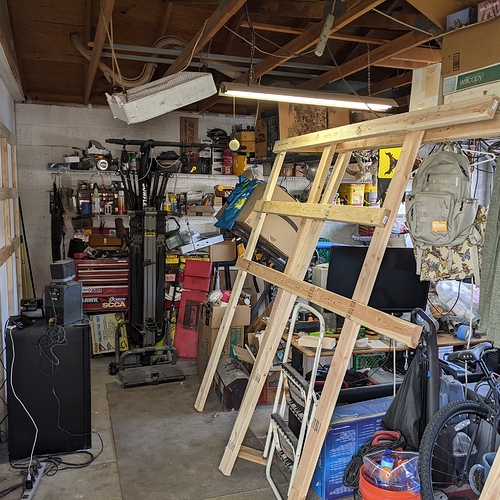 Rather than drop $100 on a fancy Kreg jig for pocket screws, I took @ChazzLayne’s advice and removed the wall frame to run 2.5" screws into my standoffs/supports from the back. (I eyeballed the locations while it was still on the wall for easy location and pre-drilled the holes through the boards into the wall.) 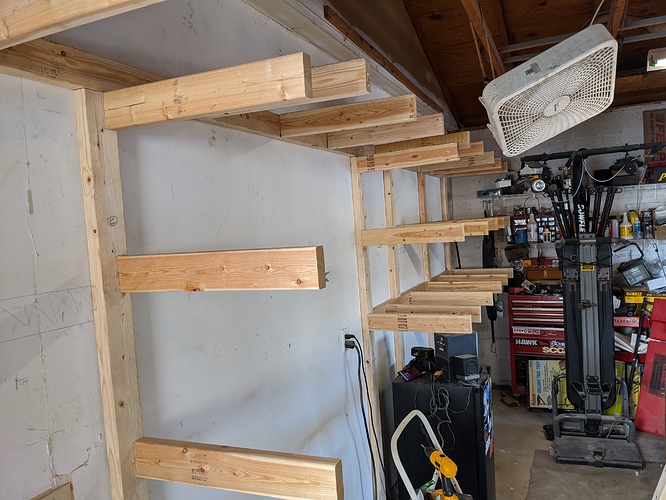 Then I located the front pieces and attached it to the supports with more 2.5" screws. I ran out of screws and decided to press on and get the shelf boards too. Had a nice guy at Home Depot rip the 4’ x 8’ sheets down to 2ft wide and the lengths I needed to fit the shelves. 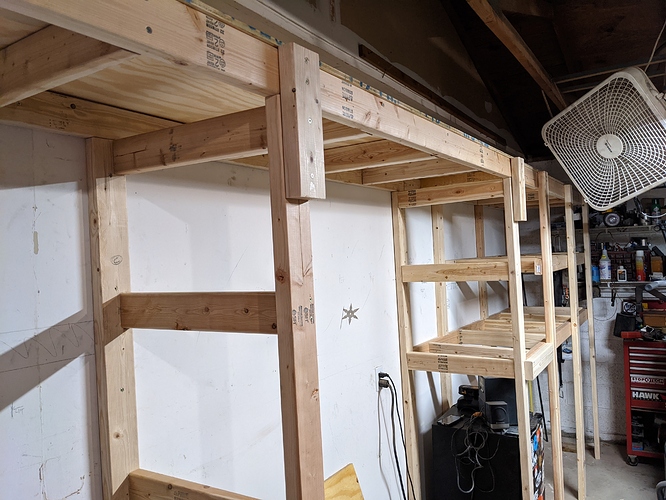 I discovered I’d miscalculated a couple cuts, but chatting with Josh from Adventure Driven Design, he suggested trimming the two uprights and making them load bearing. This was an excellent idea. Í used a couple matching scrap pieces to lock things together securely. 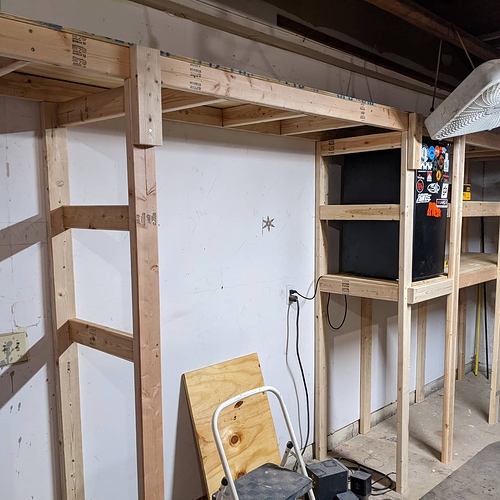 Buttoned everything up and put the fridge in its place. This was my goal for the day. 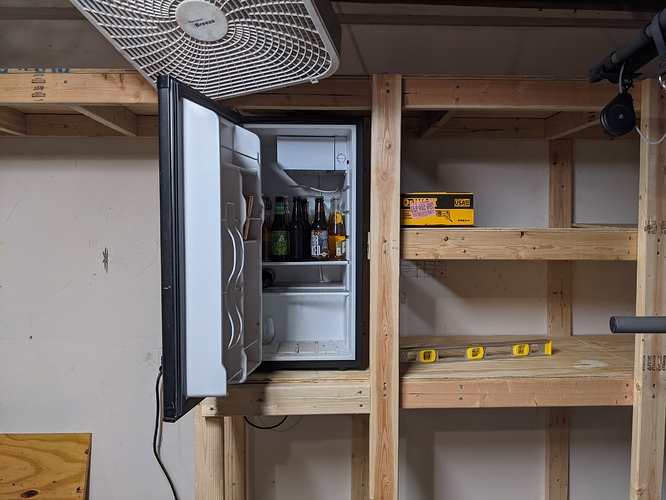 Tucked P in and went back out to clean up. Last time I used the chop saw, I had termites in the sawdust the next morning, and ain’t nobody got time for that!

Next thing I know, I’ve got rolling tool boxes stashed under it and stuff on the shelves. And room to move things around in the garage. 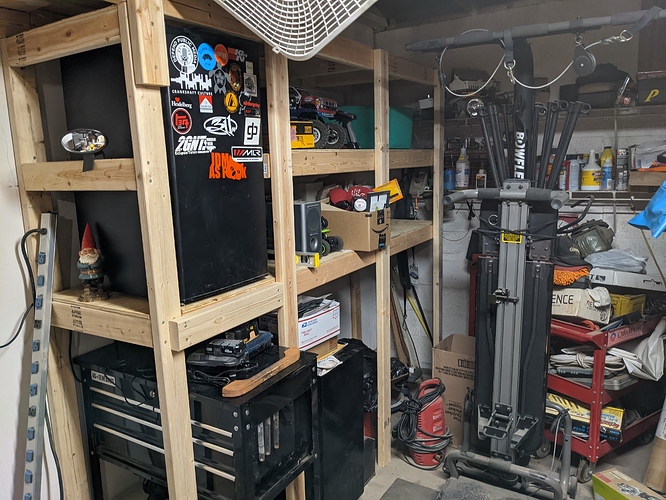 This is the biggest thing I’ve ever made with wood and I am VERY happy with the result.

I can’t do a single pull-up, but I can hang my 270lb ass from the overhead over the workbench area and it doesn’t so much as creak.

Next up, I’m going to get the bench into place, load the top shelf, and run my lights. It’s a $50 set of six LED fixtures that daisy chain together. 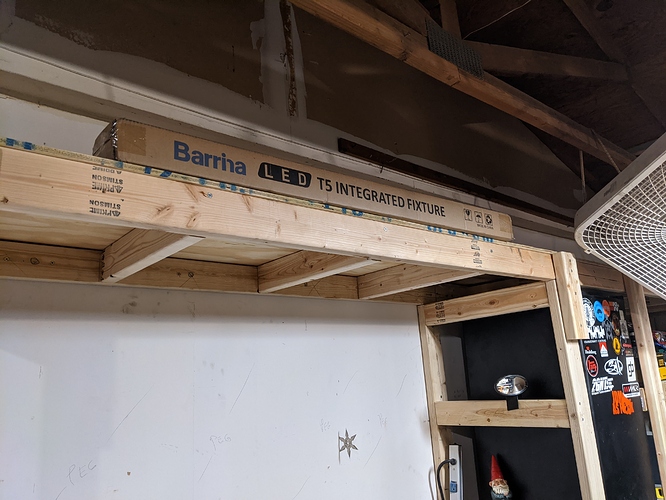 I’m gonna pay dearly for this amount of hustle tomorrow–I’m feeling wooden myself right now–but man, what an accomplishment.

Looks awesome man! Should help a lot with keeping things out of the way. I wish I could have kept all my built in shelves, but if I wanted to fit the mill, lathe, AND a car in the garage it was a no go.

Keep it up and definitely let me know if you need a hand with anything.

Thanks man. Rather than built-ins, have you considered rolling units?

I’ve already sketched out a design for 2’x8’ shelves on 4" casters. I can add another 48sqft of flex space. One will be for camping gear. Not sure what to use the other for yet. 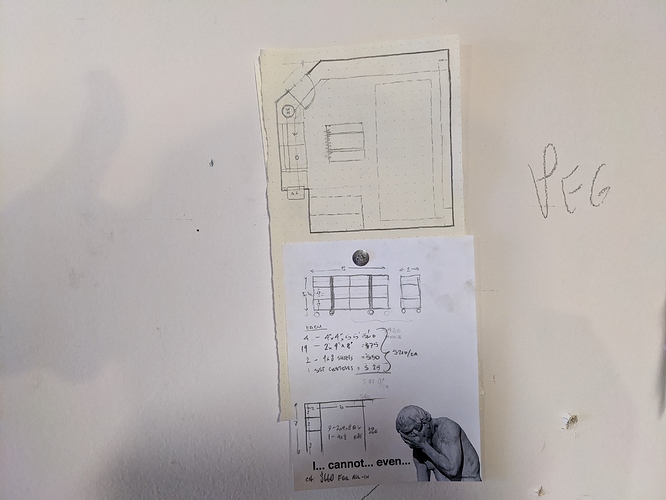 Floorplan not exactly to scale, here, but the idea is I can park–and leave–Fezzik in the garage, then move those shelves where they make the most sense depending on what I’m doing. If Fezzik isn’t inside, I’ll have loads of room for other activities.