I really like the classic BMW body styling. I had 2 different E34s and enjoyed both. One was a 525i auto that was in really good shape, but slow. I decided I wanted to get a faster one, so I bought a 95 540i 6 speed. I did a lot of work to that car, but after the first big round of mods I realized it needed more work than I really wanted to put into it. So, after 3 years it was time to move on which meant it was also time for an E38.

I got lucky with a friend who worked at a small dealer that also wanted my 540 really badly. He started looking for a 750 all over and found this one in SF, CA. 2 owner low mileage car in pretty good condition. That being said it is a 20 year old car and does have some cosmetic issue and typical luxury car issues, ie. the rear sun shade doesn’t go up and down anymore.

The plan for now is to get it cleaned up really well then make a list of issues I want to fix. I’ll organize those into systems so I can start to research and budget. The immediate issue I have to address is the front suspension. Its seen better days so that will all get replaced with OEM parts. That should hopefully ensure I only have to do that one time while I own this car. At the same time I am gonna put it on coil overs. Just something that will lower the car and make it sit just right…for now. I can’t own something this big and cool with out putting it on bags. That is one of my must have vehicles…something bagged.

I only have a few pics right now. As I look over the car I will get more. 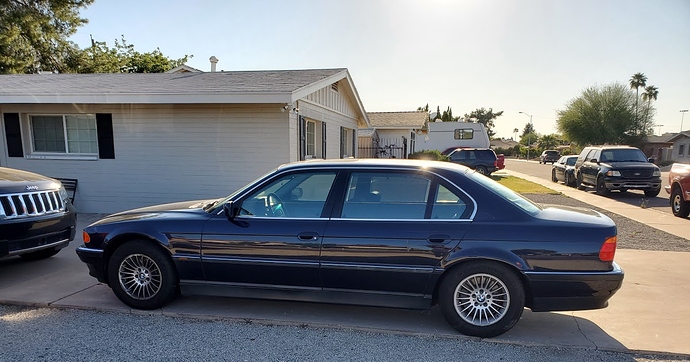 Not bad milage for a 21 year old car. 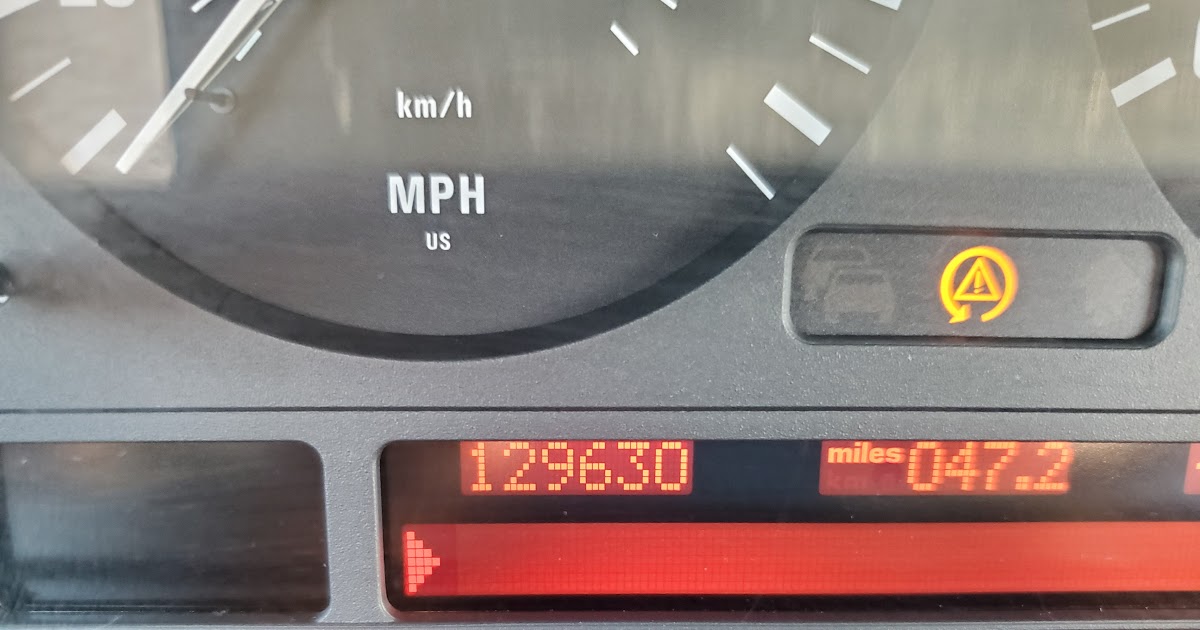 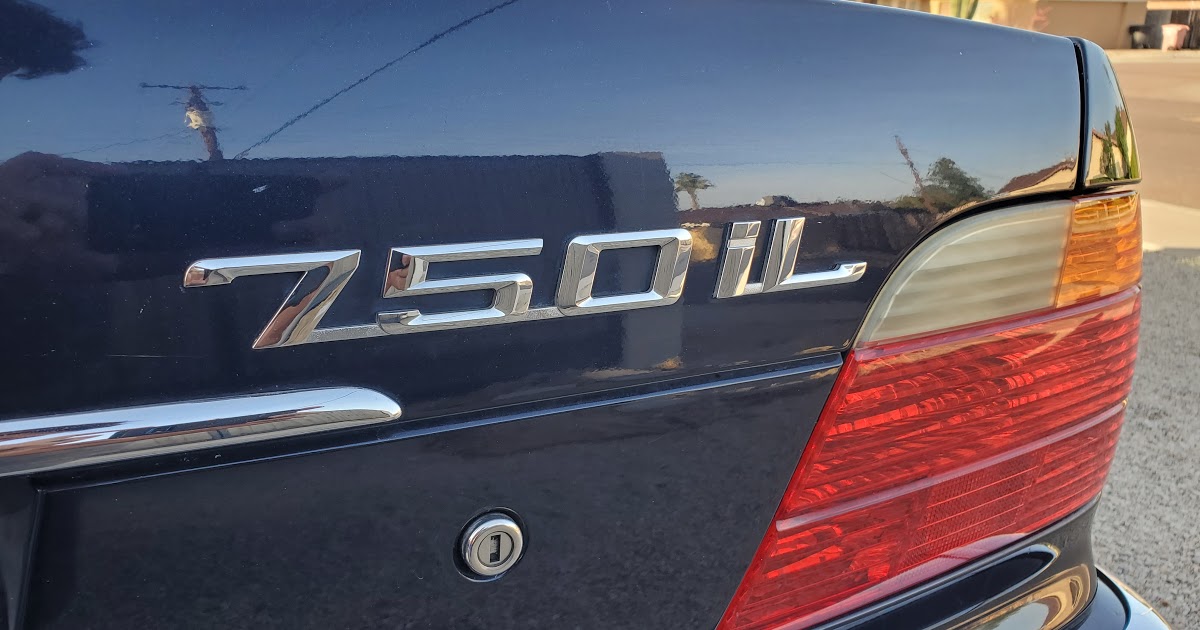 The glorious V12, which is literally 2 inline sixes put together. 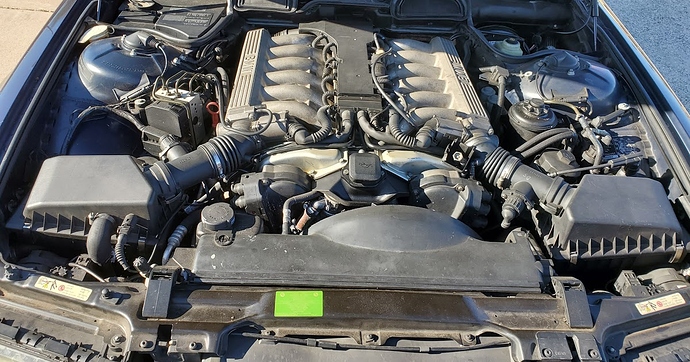 Bye bye, 540. We had a good time and you sounded freakin great. 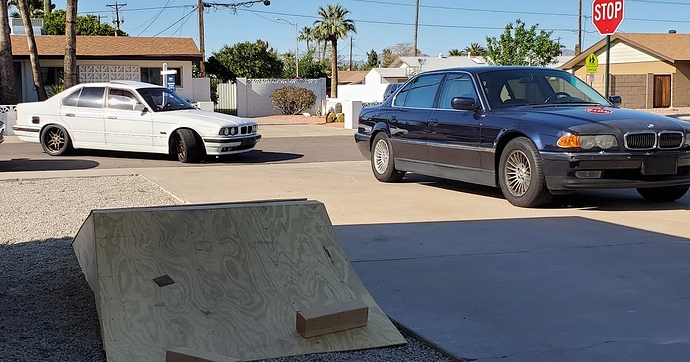 The drive away. (sheds tear) 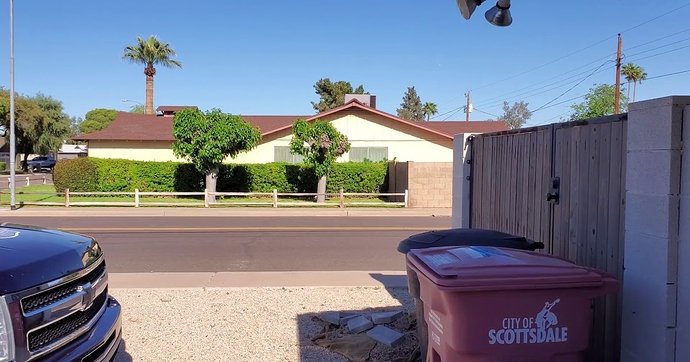 I feel the exact same way. To be honest I should have bought an E38 instead of that 540. This car is so damn awesome!

I freaking love the E38! Especially the 750il, those v12s are so smooth and quiet. Wonderful cars to drive.

That V12 looks amazing…just the thought of that level of engineering makes my head spin (in a mesmerized way).

Oh man. Wasn’t that dude texting you the night we recorded our last podcast together? That would mean the search took the better part of a year. Wow.

Looking forward to this one as well.

PS: Someone recently moved into my neighborhood with a pair of bagged 7ers, a 5er, and an X. I can’t tell if he’s saving them or the reason they all look so rough. Will see about snapping pictures, though.

Oh wow, that DID sound great.

The two landcruisers in my garage make 12 cylinders between them. Man alive. To have them all under one hood? Cool. Very cool. Appears to be two airboxes? One per side? What else makes this engine unique? Aside from, well… the whole thing! Is it a rocket, or more of a slow burn freight train, given it’s size, weight and assumed purpose?

Funny thing, they have two of everything. Even two control modules, one per bank. The intake manifold is two separate pieces as well, I’ve seen the e30 guys who want to be different use half the v12 intake. They attach to a lower plenum with rubber couplers @boostedinaz which love to crack and trigger check engine lights for lean conditions.

Yes, kinda. At that specific time we were talking about a different 750. Was really nice, just out of “budget” and rightfully so. After a bit we decided on this one.

For me thats the fun in it. Learning about the car, models, trim to decide what I want. Tgen its time to search…and search…and find just the right vehicle. Now phase 2. Learn everything I can about E38 750s.

They are “dumb” engines with not many breakable features. The V8 cars have VANOS and chainguide issues, the V12 is really just gaskets getting old. The downside is those parts are expensive and the V12 is kinda of a bitch to work on. Everything is a process which is very German.

So is it fast. Kinda and yes. From a stop its quick for a 4500lb car. It won’t leave 11s but its much faster than my old 525. Now on the highway its a different story. This V12 really comes to life. The rolling acceleration is really impressive and strange at the same time. There is no fuss no drama you just lay into it and the speedo climbs. 70…85…100…120 no problem. I’d venture to say from a roll this car would pull my 540.

I never thought of that. I bet that swap looks cool. Thats some old school hot rodding. They could even adjust runner length to an extent.

Not really, but I have a theory. I think they probably could sound good but it would take a really nice exhaust. Most people just hack off certain parts and cobble together an exhaust. I am hoping if I go from the manifolds back in stainless with an X pipe and some nice mufflers it might sound pretty good.

This is gonna be one sweet ride. I’ve always wanted one like this: 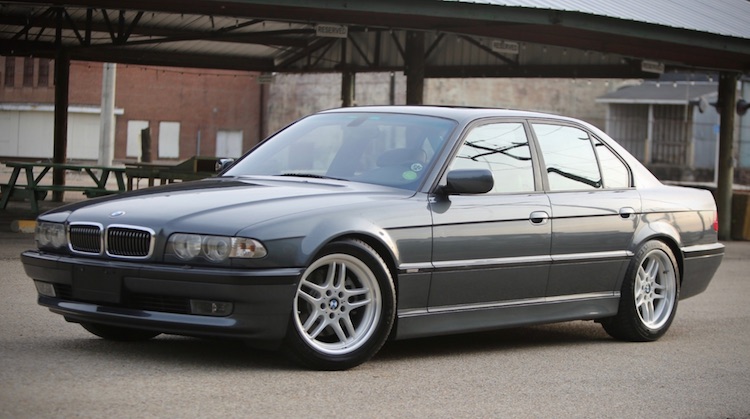 M pars work on everything!

The glorious V12, which is literally 2 inline sixes put together.

This is the engine for you @Rob.E.Thirty. Since you can’t get the inline 6 to work, rather than fold like a buster you need to step up, double down with TWO inline 6’s, and go all in like a boss!

Got my old wheels back tonight. Ill throw them on as is, but when I get the correct size tires Ill have them recoated a different color. 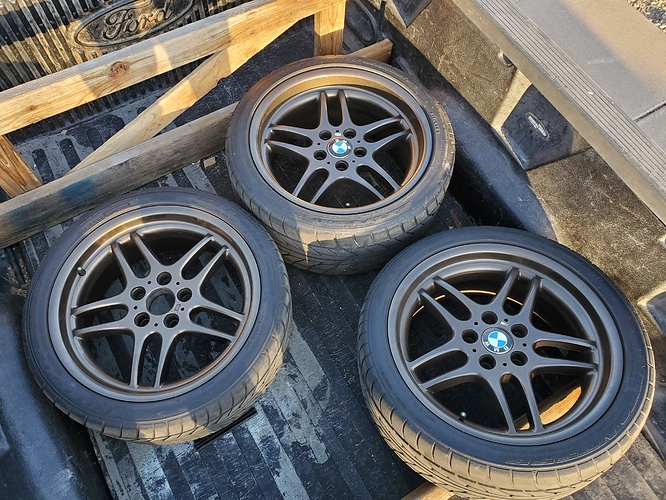 I’ve been a bit slow on the updates for my 750. I drove it for a bit and loved it until another very BMW issue came up…the cooling system. Fart noise.

On the way home from a bike ride I noticed that the temp was getting hot and the car smelled like coolant. Great. Sure enough after a little digging it appears that the water pump or water pump gasket was leaking…right before summer. Okay, you win for now BMW, it not for long.

Popped the hood and the issue was clear as day.
https://drive.google.com/file/d/1aftiZKPtFWD8Ai8FD5VRCUklkzwz6agy/view?usp=drivesdk

I didn’t even bother to really diagnose the issue because I hate fucking around. Time to take things apart.
https://drive.google.com/file/d/1apG42A55WgQ17YPXg3HG6AWPRTIF_psj/view?usp=drivesdk

The cooling system isn’t to bad to take apart with a few exceptions. Of course the mechanical fan clutch is always a bitch so I just ordered the tool to get that off. The other issue is the “Jesus bolt” that holds the damper onto the crank. That is my only concern so far. It appears that it is torqued to a bazillion lb/ft. Sigh.

Once I was able to remove most of the cooling parts I realized that there was 20 years of grime ALL over the engine. I can’t have that. Gross.

Some Purple Power and a power washer made pretty quick work of that crap.
https://drive.google.com/file/d/1nc_hISsSdtmv3EDmmJy7HXZ2VaTC3EDV/view?usp=drivesdk

Ahhhhh much better. Oh and yes, the alternator is water cooled. What could go wrong.

New parts waiting to go in.

Now back to that damn Jesus bolt. Why does that matter for the cooling system…because German engineering. These is one, single water pump bolt that is tucked behind the balancer. The balancer, held on the Jesus bolt, has to come off for that one, single, solitary bolt. Thanks BMW.
https://drive.google.com/file/d/1pmq71CKfrzHF_xEceBbr6HMxO5hpv0Oi/view?usp=drivesdk

The other part of this job is the front suspension. As dual out will the old in the with the new. I even got my older son helping out.

Second verse same as the first. Get the old shit off the car.

The dirt and grime continue on the underside as well. More Purple Power and more pressure washer.

All stripped and waiting for parts.
https://drive.google.com/file/d/1bkHOODHDfIrr6igc6JtjmGUs_fuidyeg/view?usp=drivesdk

While we wait…we clean…

Bad ass control arms to handle the stress and weight of my big bitch E38.

Slowly but surely she is going back together.

The best part so far in all this
https://drive.google.com/file/d/1oTQ4O1hGiIkmppe1sYfwH9WiHXFPPUtz/view?usp=drivesdk

Dude. This is thorough. I dig it.

Those control arms look kinda spindly to me. More like outer tie rod ends. Is that really what holds it all together on a barge of a Q ship like that? (The ends look next level though.)