When we left off I was in the midst of modifying my 328i, despite it’s one flaw, having an automatic transmission. This story came to a fairly abrupt halt during an autocross when, despite having the auto in manual mode, it still upshifted to 3rd at the worst possible time.

So it had to go, off to the great car vending machine in the sky, kind of. I sold it to Carvana. My search led me down a few different paths and I thought I’d found the right car but despite the many positives the car fell short. The Fiesta ST is definitely not for everybody.

Funny enough, I ended up with a BMW shockingly similar to my last one. In BMW jargon it’s an e82 but to everyone else it’s a 128i with a spectacular six speed manual. Now at this point you may be asking yourself “Why didn’t Rob buy a 135i? It has a turbo and a lot more power!” Well, I almost did but I decided against it because they have some very expensive and almost guaranteed failures. And when I say expensive I mean usually around one thousand dollars or more.

So I opted for the lowly 128i. Powered by a humble 3.0 liter in-line six with a staggering 230hp and backed by a lovely manual transmission. And also, all the suspension and braking components bolted to an e90 m3 are a direct bolt on to the e82 chassis.

So the plan is to build a reliable track day car to really learn to drive in. I’ve already taken it out to my first ever track day out at Willow Springs for a lively jaunt around the streets track. But not before upgrading the pads to Hawk HP Plus, flushing the brake fluid with Liquimoly race spec fluid and replacing the engine oil and transmission fluid. 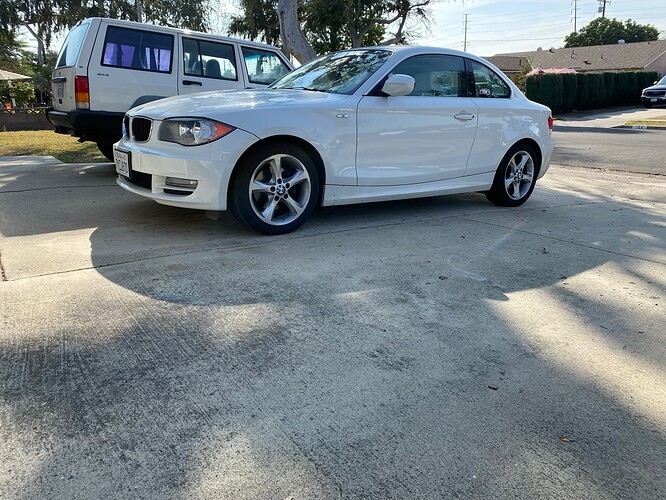 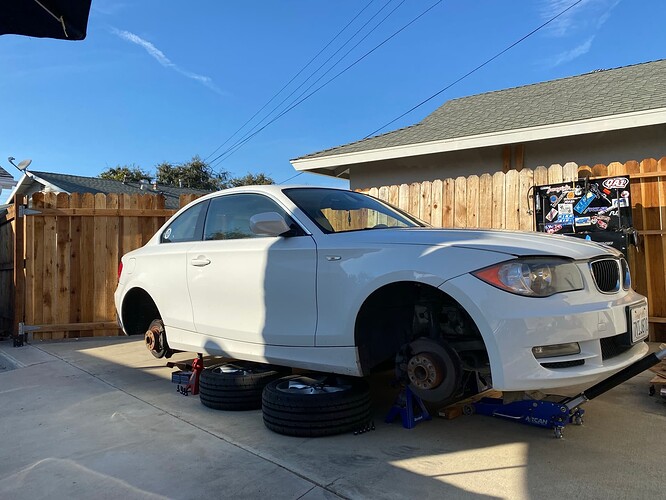 Dude! Welcome back! I’ve seen you tracking on the instas, I think. And I’ve been noticing 1ers quite a bit lately. How’s the balance and power delivery?

Do you feel the 128i is a spiritual successor to the E30? Everything’s so damned big these days.

Thanks! I knew I’d make my way back someday. Been a hectic year. They’ve been called that, there definitely a lot smaller than a 3 series once you’re inside.

But yeah, I’ve done an autocross and a track day so far with it. Autocross was fun but it doesn’t quite compare to a full on day at the track. The car handles pretty well, touch of understeer in a hard corner but I’m making some changes to help with that. It’s gonna be a slow and steady thing, I’ve read about people doing too much to these cars and really upsetting the balance.

At the moment I have e9x M3 control arms for the front and Whiteline subframe inserts for the rear. The subframe bushings are weak and allow a lot of movement under heavy loads. The m3 arms have way better bushings and offer a negative camber gain of .75.

I think that’s how I want my next daily to roll. It’s too easy to start throwing mods at it and ruin a good thing. I like your approach.

I do not like replacing bushings. Tell me it’s easier on a newer vehicle!