Stormy the isuzu trooper - way too much money and effort 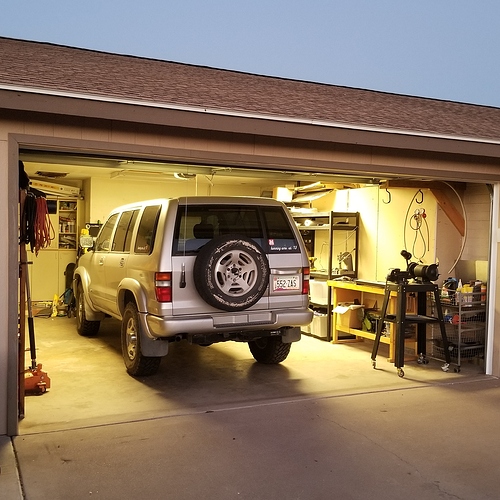 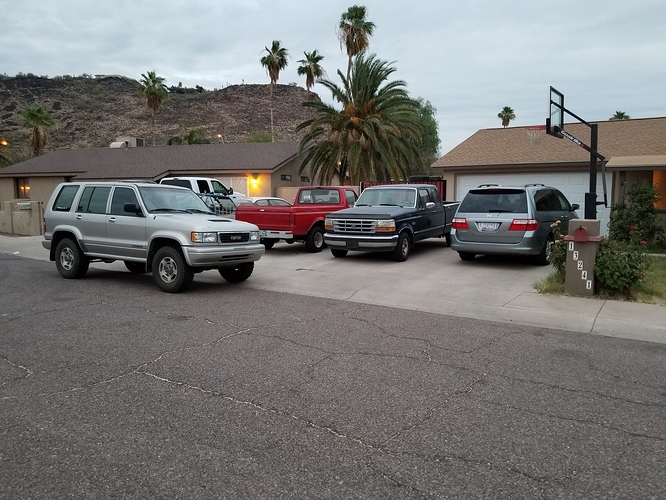 I did crown king a few times and a bunch of random other trails, took it camping, and daily drove it, and it quickly graduated from cheap temporary beater to favorite car ive ever owned. It way outperformed expectations off road, was a comfortable ride in town, and an all around decent vehicle. The current tires are 265/75/16 pirelli mud tires.

And then the AC went out. Living in phoenix this is not tolerable. The trans also started leaking, and it had a bad valve cover leak. I bought the blue f150 to take over daily duty, and got to work.

Fast forward a year and a half and stormy has just reassumed DD status. New AC, converted to manual from automatic, a winch, some LED lights, fresh gaskets all around, electric fan conversion with a huge dual pass griffin radiator. 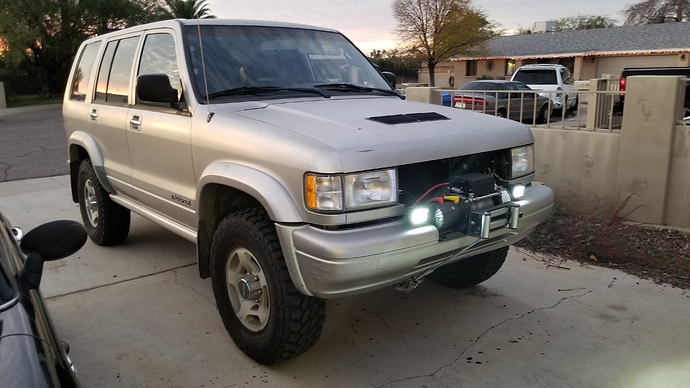 I still have shocks and new front axles on the shelf and need to replace my front ball joints, they are still tight but all the boots are torn.

I’ve also got a CB in the cab, and a nice little tool box in the back. I am getting a 12V air compressor for Christmas and I’m trying to decide if I want to mount it and plumb lines outside because overlanding or just keep it in the case in the back so I can move it around if I need.

Eventually i would like to diesel swap it with an isuzu diesel from Japan, but that’s hard to figure out emissions wise here in Maricopa County.

I know Facebook is a swear word here, but I will have to say there is one page worth it’s salt, the Isuzu Trader™ page is the best car page on Facebook in my opinion. It’s a bunch of nice and helpful folks who don’t take themselves too seriously. Very rare for FB. I would never have made it through my trans swap without that page as the planetisuzoo forum is fairly well dead and photo bucket made most of the old posts worthless.

Shout out to @BradD and @racedinanger, love the podcast, I’m fugerob on IG that asks dumb questions and then you argue about how to pronounce my name. 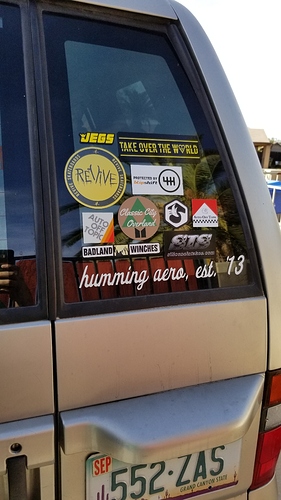 I see that Classic City Overland sticker on there. We met him and his family at the Smoky Mountain Overland Rally two years ago, and I follow his SAS on IG.

I’ve bought a handful of parts from Eric. Not sure that he has much of a plan to get his business to the next level, but he’s a decent guy. He has 2 SAS rides now, he recently picked up an SAS trooper.

Honestly I’ve wondered the same thing regarding his “business” since I met him. Seemed like a side hobby or something. He was slinging Dobinson parts at the SMORally, so I assumed that was his full time gig.

No, he’s a mechanical engineer for a day job. He’s kinda stuck where I was with my last business, can’t find that next gear to do it full time. He seems content to let it fund his hobby though.

My wife totally spoiled me for Christmas and got me this awesome air compressor to put in stormy. 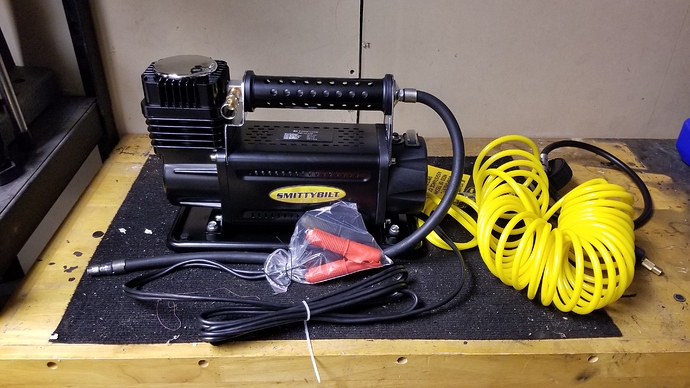 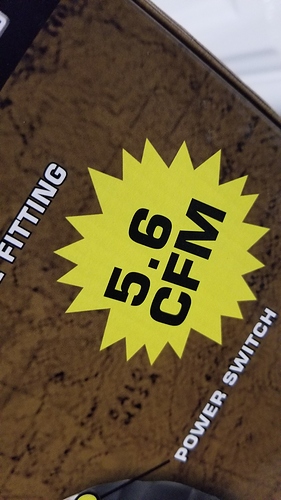 Nice! I love having onboard air. I’ve got the Viair model somethingorother. I forget the specs but it takes about 5 minutes per corner to air up my 31s from 10 to 35psi after a trail run. It could be faster–and I’ve used it more for bike tires than anything else–but it’s definitely nice to have, if not a must have, since airing down at the trailhead and back up before rolling down the highway is just as much a safety thing as comfort. 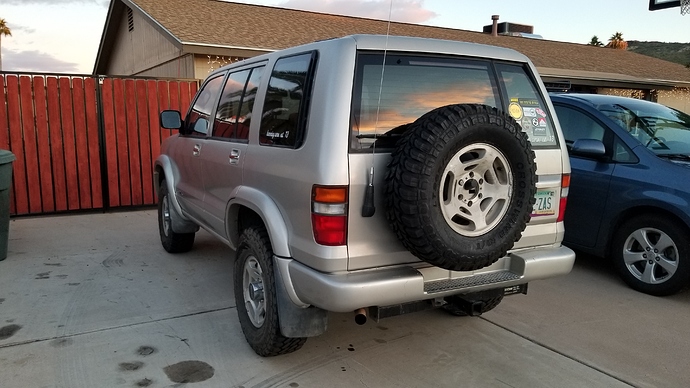 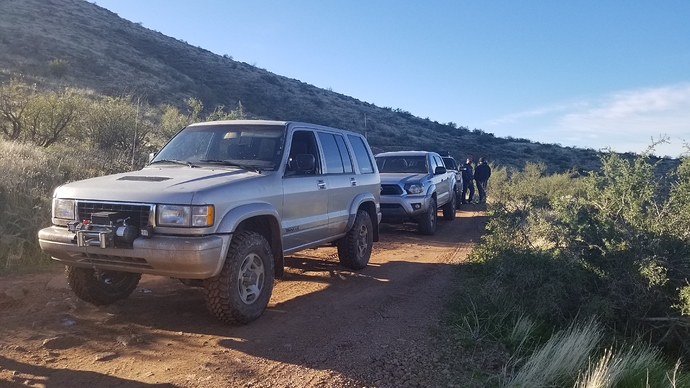 Well, against my better judgement, and fully knowing I have problems to sort out in the front suspension and with both driveshafts, I went out 4 wheeling on new years day. But alls well that ends well, and I made it back home no worse for wear. 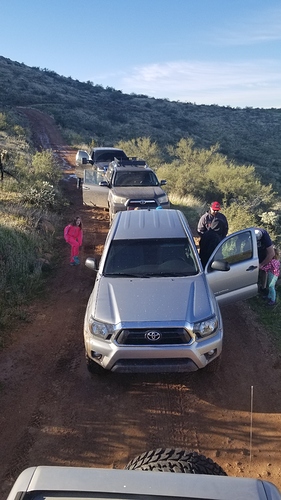 We took i17 north of Phoenix to table Mesa road, and headed east. We took forest road 41 which quickly disappears into the hills and eventually lets out at seven springs recreation area. 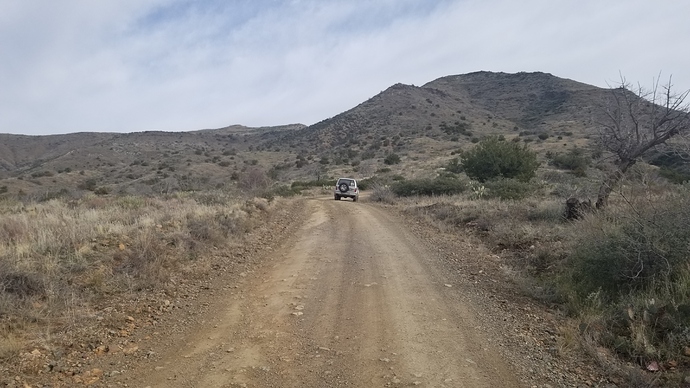 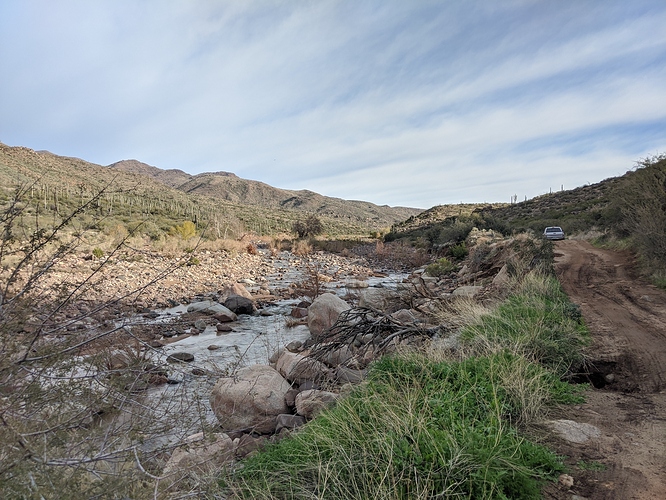 The first 1/3 is brutally rough, a harder road than back way to crown king. Back way to crown king had lots of difficult obstacles but most have an easy way around, this was just a very very rough road with several water crossings. I tried to keep an eye out for the turn off for fr17 but didn’t see it, but I’m anxious to try that some day, I’ve been told it’s a much more challenging trail, and that the view at the top is amazing. 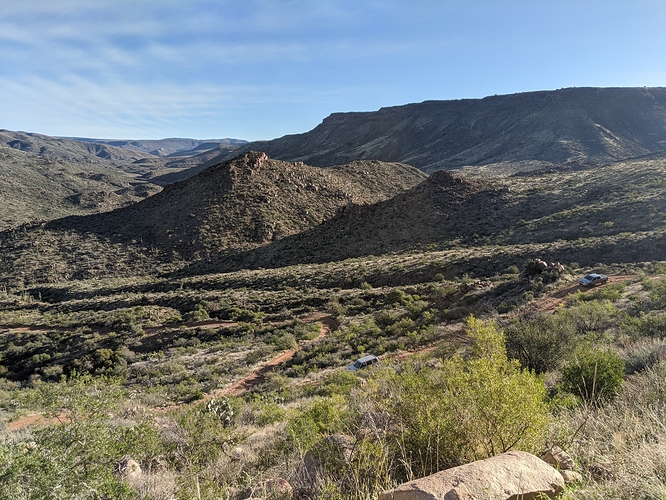 The first section got washed out hardcore a couple years ago. How was the water crossing?

And what was the front end doing?

There was enough water to consider it a crossing in at least 4 places. First one was the deepest, probably close to 30 inches. The rest were between 12 and 24 inches deep. None of them were flowing fast at all.

Front end has some horrendous clunk that I can’t find. Its front driver corner. Most of my ball joint boots are torn and so I knew I needed to replace them all, but this confirmed it. Can’t feel it on the street, but going over rocks and such it just clunks non stop. The next most likely is the front drive shaft, which I’m getting both drive shafts rebuilt next week just because they have seen better days, dent in the rear that vibrates really bad, and the seal on the slip joint on the front one is toast. There is a chance that it’s my trans mount, but I think that is the least likely, and a visual inspection looks fine, also can’t budge the trans from under the car when i crawl under and push on it.

Glad I’m not the only one that transfers parts to the next rig.

Looked like a good day for you guys . Temps dropped a bit here and I mostly researched for when warmer adventures are happening again.

I definitely plan on keeping the trooper for a while and most of the custom stuff won’t transfer, like the winch bumper I fabricated, but this being a cheap rig, and my proclamation that I will be the last owner of this vehicle one way or another, means that I’m inclined to spend money on stuff I can take with me when the trooper turns into a junk yard car.

I would die living in the cold you live in. I got juvenile arthritis as a young man, and that led to total hip replacement at just 33 years old. That weather would kill me.

Time to pull the drive shafts. Rear one has a big dent: 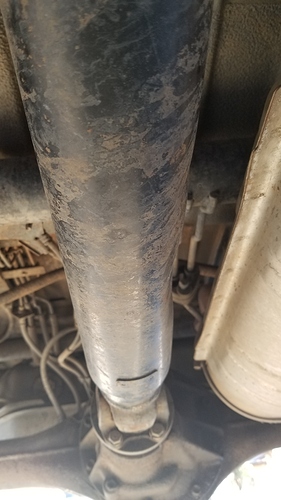 And front one has a bad seal: 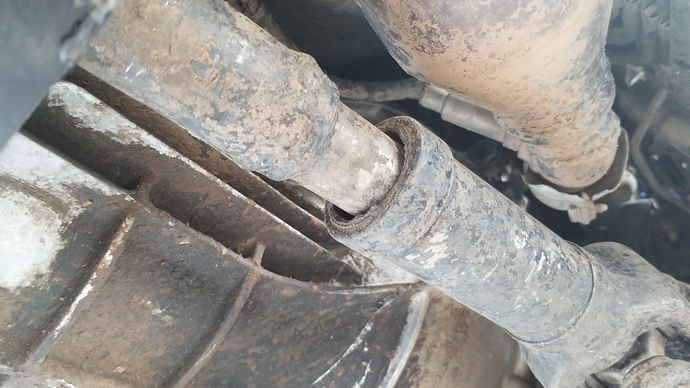 So Joe Isuzu was an Icon of the 80’s and 90’s television. A man in a cheap suit, slinging cheap cars. He happens to be an active participant on the best isuzu page on The Social Network. 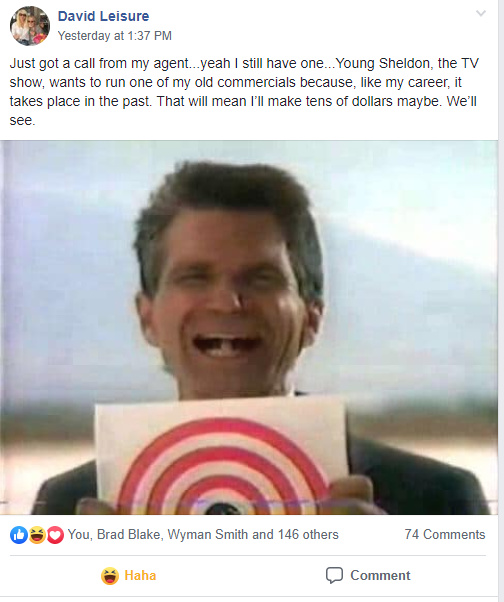 I find it amusing that a guy who owns no isuzus and made terribly cheesy commercials still stays involved, so I asked him about it… 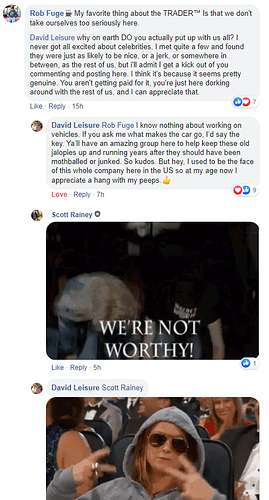 Just a little side track into the strange crowd of isuzu owners. We love goats named stevie, and we love Joe Isuzu.

Also, put my rebuilt driveshafts in stormy this morning, and it feels amazing! the highway speed vibration is totally gone!

You know, it’s a good thing there isn’t an easy way to blast things out to @everyone. Because if there was, I’d probably be abusing it right now. Please allow me the gratuitous use of the H1.

I probably can’t H1 an emoji but let’s give it a shot while we’re at it.

I remember those commercials on TV. Is the Isuzu Impulse Turbo, with its tuned by Lotus suspension, really faster than a speeding bullet? I say yes.

And the comeback commercial, seeing that slick SOB walking back onto the lot? #allthefeels

I love this. #coty 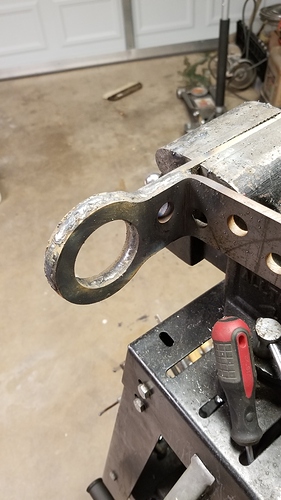 20200110_2209512268×4032 2.47 MB
I’ve had some tow hooks I designed for the miata sitting around forever and decided to put them to use for the trooper. I bent them up and welded the pair of them together. They are only mild steel, 3/8" thick, so 3/4" for the pair. I’m planning on pulling the bumper cover off when I do ball joints next weekend, so I’ll weld this to the winch bumper then and trim a hole for it in the bumper cover. Should be very sturdy and more than able to hold the load. After I test fit I’ll bend the back side up so it will cup around 3 sides of the 2x4 beam of the bumper and be welded the whole way around. Then I’ll have somewhere better to clip the winch hook to instead of the very low oem tow point. Still need to clean up with grinder obviously.
2 Likes
Brian January 11, 2020, 5:16pm #18

That’s gonna look so good once cleaned up a bit. 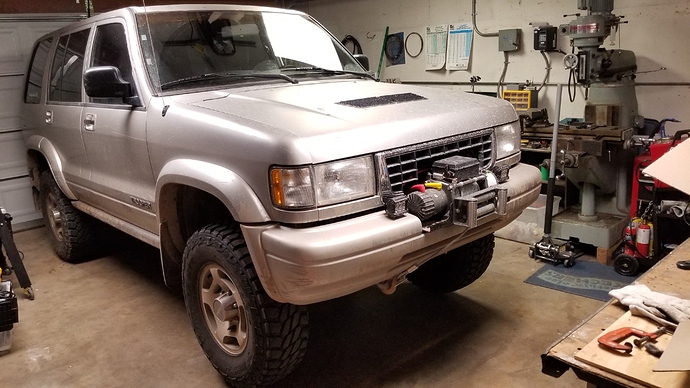 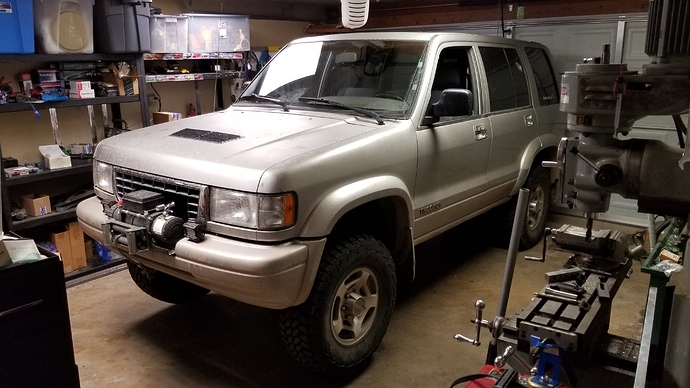 Back in the garage and ready for a new front suspension:
Ball joints, control arm bushings, axles, and shocks all getting replaced!

I’m also inspecting the brakes and brake lines while in in there. Anything else I ought to do while I’m at it? It’s my first time rebuilding a front suspension. I might see about making an easy disconnect sway bar end link while I have it apart. 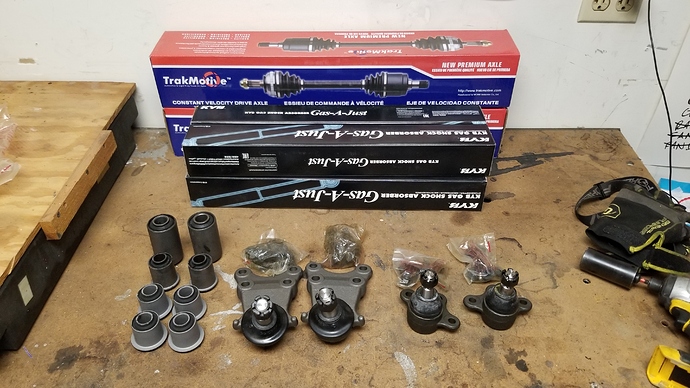 Time to get this party started. I should have read the Fsm first, but I’ve never been afraid of getting in over my head…