I’m also looking at tables on the back door. I really like how the frontrunner model has a surface that slides sideways out of the main table after it drops down, doubling the surface area. Just something to ponder as you design…

I likely won’t be buying that one, since my Canadian dollar sends it north of 300 bucks. Ouch.

Scheelman, I think you might need to add 1k in front of the price of. Each seat. Maybe more?

< Does quick google… > Well I’ll be damned. So much for that idea. I might, one day, be able to talk V into being cool with my dropping $1500 on a pair of front seats if it meant total comfort, but putting $3,000 in seats into a $2,500 truck—nevermind I’ve easily got $7k into it at this point—just doesn’t make sense.

Here’s to figuring out which Mercedes S-Class seats had heat, cool, and massage, and picking up a pair for $500 all-in. (Or something like that. I really don’t want power seats.)

I wouldn’t compromise the headliner for it. Install underneath and then refit,. Imho. Removing and replacing with fabric would hurt resale but more importantly would possibly begin cycle of reattaching falling fabric every spring?

That’s a good point. And reminds me I had forgot another mod I have planned for the headliner which actually kinda requires the headliner. It’s a roughly 300-strand fiber optic twinkle light kit like they have on them Bentleys and Rollers. 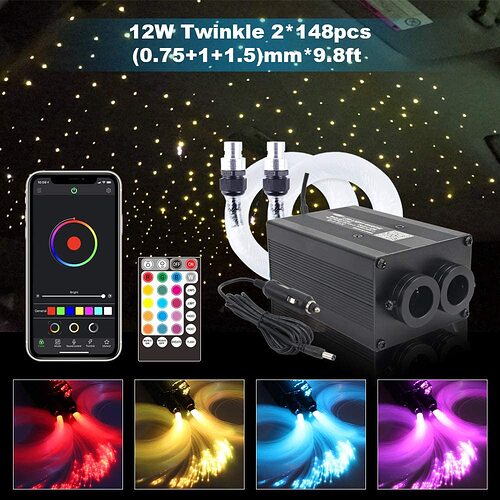 I’ll still be installing Noico in the ceiling, but I’ll be retaining the headliner. Or replacing it, maybe? I have tear in mine and it kinda bugs me. Then again, maybe I can just fit one of these slim, aluminum LED pods in that location. I’d like to have optional, white reading LEDs for the back, but not sure if I want to go with straight LED strips back there.

Every time you modify something I’m surprised how similar our two vehicles are.

Orlly? If only mine had theater seating or whatever. Sometimes I like to think about raising the roof, Troopy-style, or installing a pop top a la Tim & Kelsey, but those are ideas for well, well into the future, imo.

Oh yeah, and a V8, too. Although, another quick google gets me even more curious. Apparently the 4.0 in the Disco II is good for something like 185hp/250tq, while the 3.5 V6 in the Pajero NL is 205hp/221tq. And yet I’ve watched the Disco just walk away from the Pajero when the road starts climbing. Hmmm…

Moving on to tailgate tables…

I’m also looking at tables on the back door.

On the table vs. cubby dilema, would it be possible to make the table taller/wider so it covers the entire cubby door? It could even replace the cubby door at that point if you felt like keeping single-stage access to it.

I think that’s totally doable, Chazz. If all I need from the toolkit is a couple pieces for the jack, I could put them in a pouch with the jack under the second row. (I currently keep a dozen or more empty plastic bags there for trash bags so I know there’s room.) This would allow me to remove the tool kit piece altogether, maybe removing the plastic trim from the upper ledge down.

Of course, that’s talking homebrew table. Not a bad idea, to be honest. Here’s the two kits I was looking at on Amazon. 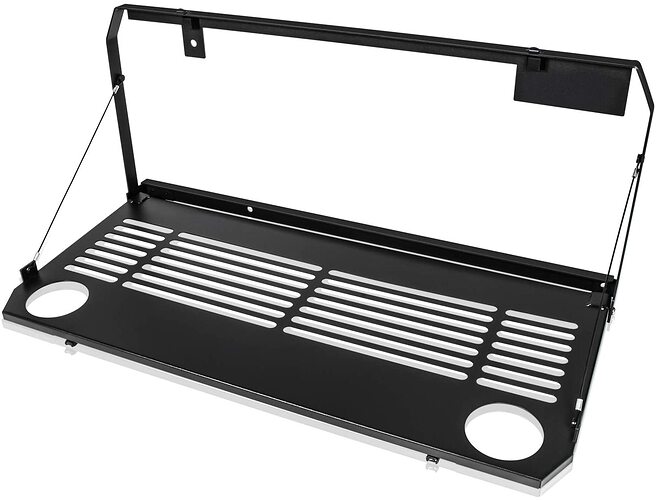 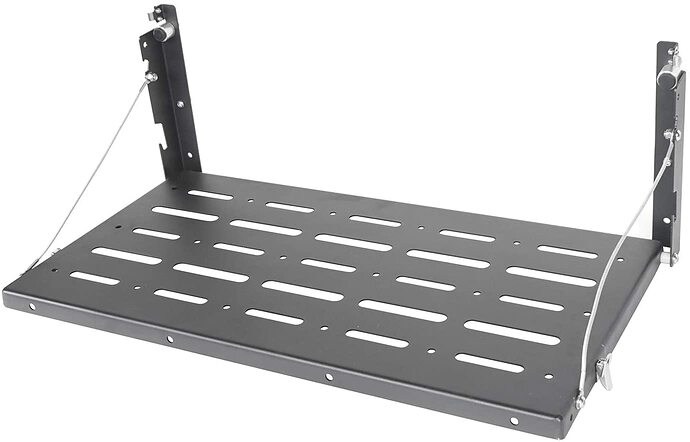 I don’t have a preference between these either way. I like the cup holders in the former, and the beefier, yet cleaner frame on the latter. Neither goes the width of my 44-inch-wide door, and both have reviews mentioning dodgy hardware and instructions.

A better bet would likely be doing something custom with the piano hinge. So long as I could attach a pull cord to the door handle and access the rear washer reservoir filler from time to time, I think a full-width shelf would be ideal.

Also seems like I should figure out the drawer setup first, though. Not only do I not want the folded table interfering with the floor or carpet trim, I also don’t want to lose access to a drawer on the passenger side. Not sure if I’d rather have a table to the right of a slim, slide-out stove or behind me, given a stove sliding out on the driver’s side.

I also saw the one with the extension, Phil. There were comments that it did not work as well as you might think. If I’m gonna make my own, though, I think I’d have it work like this:

Add a little shelf at the base of the window for, say, seasonings and such, and a switchable LED strip under the third brake light—all tucked nicely under a simple, DIY awning, and I’d be sitting very pretty, methinks.

To this day I am still jealous of Chazz’s setup when we stopped for lunch at the abandoned fuel station in the desert en route to AAV’s MR in Big Bear. Shit you not, it’s 110°F/43°C and dude gets out of driver’s seat, flips a couple latches, extends a generous awning, and grabs a sandwich in the time it takes me to dig through all my shit deep enough to access the cooler in the backset, at which point I had to make sammiches on the seat in the sun.

CC: @MrGalantguy I know you’re thinking about this stuff, too, brother. What you figure?

You know I love tinkering and brainstorming with this stuff, totally down to get together with a tape measure once the snow clears and see what we can figure out.

Although, another quick google gets me even more curious. Apparently the 4.0 in the Disco II is good for something like 185hp/250tq, while the 3.5 V6 in the Pajero NL is 205hp/221tq. And yet I’ve watched the Disco just walk away from the Pajero when the road starts climbing. Hmmm…

Okay, so I had the wrong Disco. 220tq to 300tq is a solid jump, and coming in sooner no doubt helps as well.

Definitely down for some tinkering in the sun up the hill. Just heard 17 is closed north of Anthem and Anthem is expecting blizzard conditions in the next 24 hours. WOW. Hope you’ve got plenty of firewood at the ready. Wait. You don’t have a fireplace.

Found this setup on a Pajero forum down under. I like the fuller size, but not sure how I feel about things being so low when opened. The bumper is below waist level. Having just run a Jet Boil on the bumper in the snow, it’s doable, but I’m not building something that isn’t at least somewhat ergonomic. 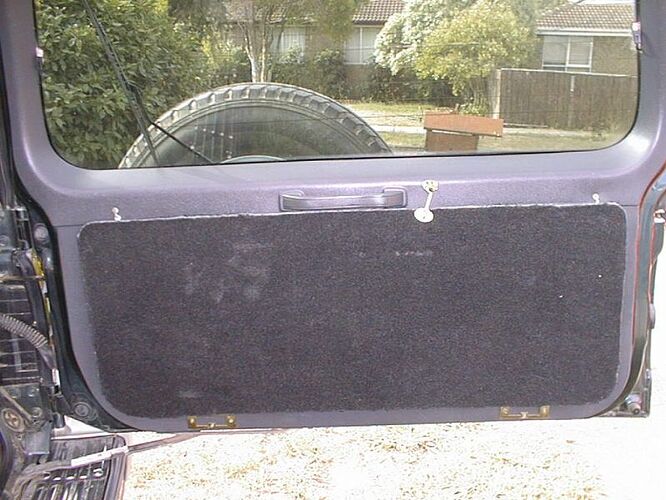 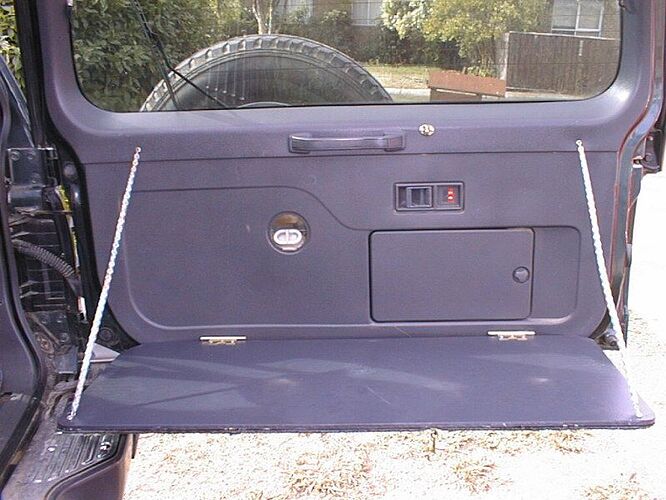 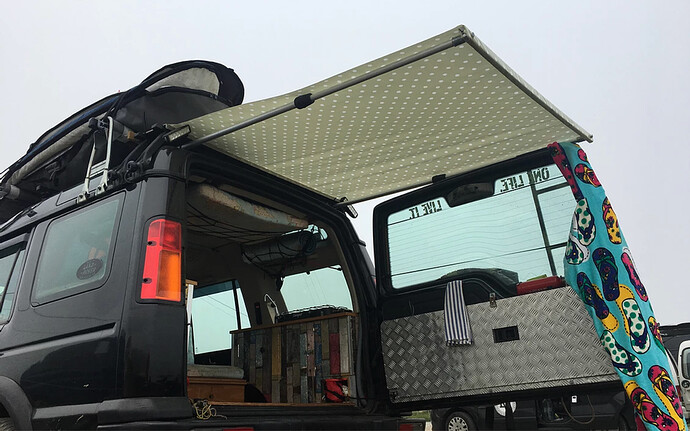 As far as the head liner goes, you can buy the fabric and recover it, I would keep it and just put your sound proofing on the roof panels. A plain sheet with no form behind it would look terrible in my opinion,

Inventive guys, the rest of their camper build is pretty sweet too. IIRC that was the build that convinced me a full kitchen was possible (not slide-out) in the back, and to ditch the built-in stove for separate single-burners I can place anywhere.

Haha! Full circle! This whole time, I’ve been telling myself I want to do the single burner with the LPG hose like you do to preserve space. What a world.

@humming we talked about this in Stormy’s thread last summer. Was only a pipe dream then, but wow. What a difference.

I learned I have to leave the trans in L or else it runs through first gear instantly, then second gear a second later. But left in low, well, I’ve never–ever–done anything like this before.

It was all I could think to do, absent any obstacles in the neighborhood.

I am VERY happy with this.

I do, in fact! Ironically, all the numbers were in Stormy’s build thread until now.

Am I missing something about tire size, though? I guess it would play a role (ha!), but I’m not sure. If it helps, I’m on well-used 31s.

Stormy the isuzu trooper - way too much money and effort

And if I then get another set of Marks Adapters…

I MISSED HAVING THESE GEARS.

Rocinante had these gears. When I told Toasty I was looking for an early Montero, he was excited to tell me John Hughes was selling one with “crawler gears” installed. He said it was a seriously good mod and I would love them. When I test drove the truck, John told me he was selling me the tcase and throwing in the truck for free. That’s how I sold the truck a couple years later. They were both right.

Rocinante was a 5-speed manual.

Fezzik will be a little different because he’s an automatic, but man oh man do I want to get out and try these suckers. Might be sooner than later.

Wheel diameter for an estimate of mph at a given rpm

Side note, they’re is a local guy with a solid axle swapped Amigo with double t cases that has a 211:1 crawl ratio. He’s @radmigo on Instagram. His rig is so awesome

That’s amazing. I’ve followed and reached out for the interview!

That IS pretty freaking cool! Damn!

Man, 580:1 you better hope your tire slips. I’d be scared at that point of twisting axles or driveshafts all the time. Your motor has A LOT of leverage at that point.

At this point it’s just pulling the Earth towards itself.