Fuel costs are killing me on my commute. Tanya’s 100 series pulls the trailer, and the 70 series is my ultimate adventure rig. So both stay.

But the beautiful Prado 90 is the commuter. And it’s fuel econ is amazing for a permanent 4wd rig, but still…

So I am putting it up for sale. And I’ve already gotten it’s replacement. 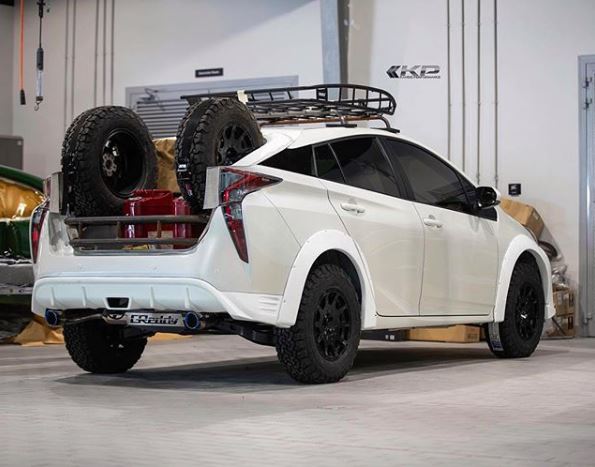 LOL. I’m a guy who likes cars of all kinds, apparently.

But what I bought is about as far from toyota as you can get, in some ways…

Its the S model, and is a john cooper works edition, so it has a supercharger, and 210hp. Manual of course, and found it for fairly cheap with 138k kms (~80k miles). THe biggest surprise of all? No leaks! (Future Phil says "you wish!) Its an absolute hoot to drive and as long as I can stay out of boost, I’ll save fuel on my daily commute. Pretty excited at this find…

I know they have a rep for quality which isn’t great, but my research indicates that the gen1 R53 models were the best bet. It has the Tritec W11 engine instead of BMW’s later, fancier N12/14/16/18 engines which suffered from sludge and timing chain issues. No HPFP, vanos issues, etc. Simple, semi-reliable, iron block.

I’m sure it’ll have its own quirks, but you don’t drive a mini and expect it to be a corolla. 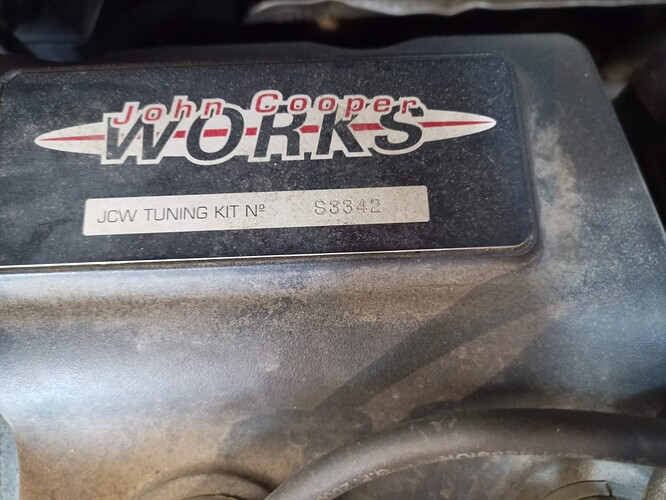 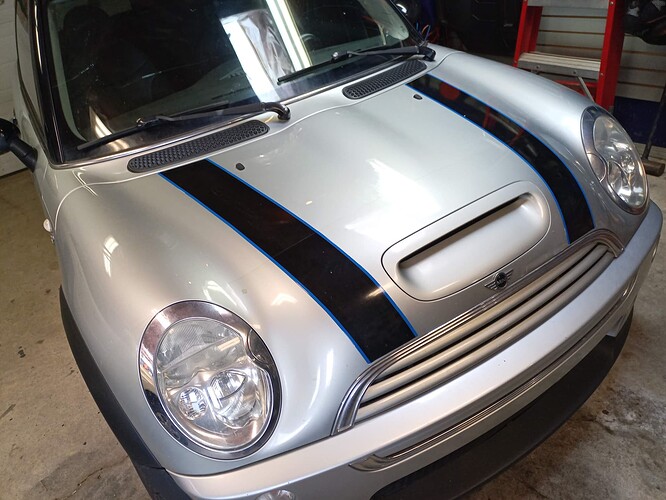 @humming what year was your wife’s Mini? Any advice for Phil? 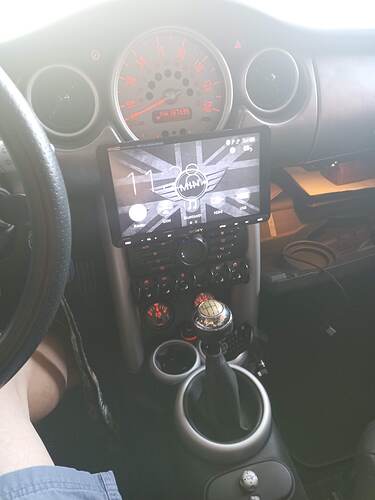 Like this! 9.5 inch screen in a place where there was only single DIN.

Is this your Android Auto install post, then? (It’s a tradition at this point, methinks.)

In all seriousness, though, now that I’ve had a chance to use AA with V’s new Mazda, I’m kinda thinking about how to get it into Fezzik next. I wonder if I can get him in the garage for an interior refit before winter?

Lol. I guess it is? It fits really nicely in here, considering how small the car is outside. 9.5 inch screen is easily reachable from gear stick. And when sitting in the seats, it really doesn’t look like a giant floating screen stuck in the middle.

I love it. And yes, I believe AA (or carplay if that’s your thing) belongs in every rig. It’s just so functional. And non distracting compared to most other options.

You absolutely should put one in ol fezz.

Anyway, what a fun car!

Ironically, I just sold my subcomapct (Yaris). First time I’ve been without a small car in 17 years. I hope the MINI is good for you!

I just sold my subcomapct (Yaris). First time I’ve been without a small car in 17 years.

First the OEs get rid of their subcompact offerings, then SCC gets rid of theirs. Meanwhile, Phil trades Betsy XIV for a lowered sport compact for the first time in 10 years and I’m thinking Miata in the spring.

What’s the world coming to?

The world is a strange place these days; what else can I say?

It really is. Lol. But not in a bad way. Welcome back Mister Andy!

As we all subscribe to: life’s too short to drive boring cars. And I think there’s plenty out there to try, just may require letting them “age” a bit so they are attainable.

The day before yesterday I put a lift in it. 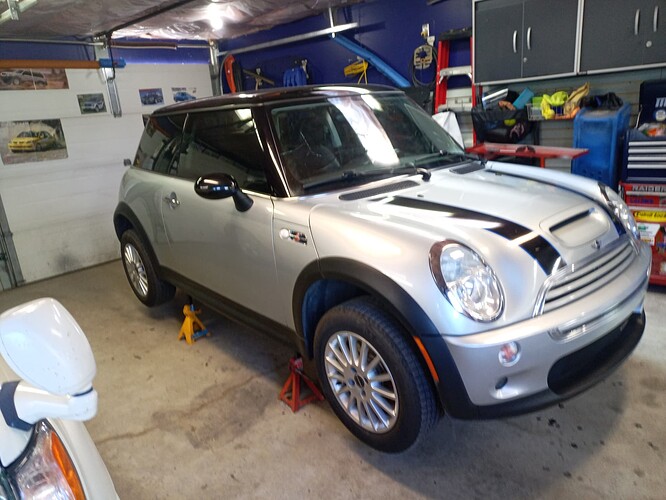 But it seemed to hurt my fuel economy so I took it out again.

You really lifted it?

Now I’m seeing Minis all the time. I’ve always wanted to try driving one. I like the go-kart vibes.

Look closely. Its on jack stands, because I think I’m pretty funny. Heh.

So. Suddenly I’ve enough to fill a build thread. Is it just as well to put it here?

I started with plugs, wires, air filter, and new dipstick (old one had broken handle). And of course ANDROID AUTO, because fun stuff! Even used an adapter to get the steering wheel controls to work! So cool! 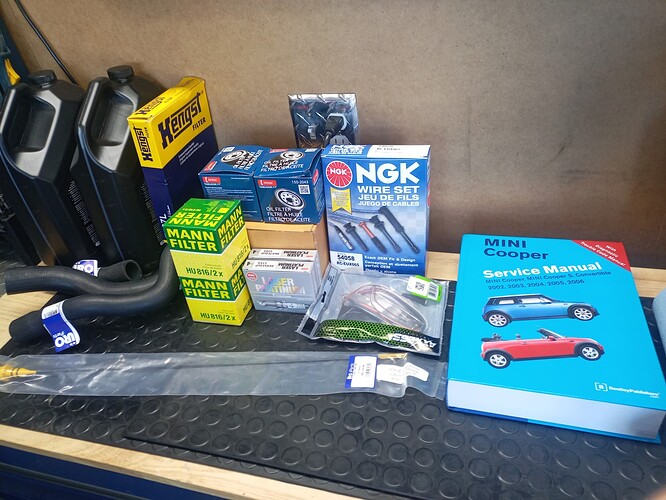 But then: Last Tuesday I took it to have the A/C recharged, because despite what some might think, we can have three or four months where things can be hot as balls. Not cheeseballs. Like, meatballs. Fireballs! And its been hot all summer.

Anyways, Wade found a guy who will recharge from his driveway for a hundred bucks, assuming that’s all it needs. Yeah, that wasn’t all it needed, hence the build thread.

My plan was to drive it like it was with minimal work until next summer. Those that know me know that I clearly don’t even know myself. So… A/C guy says “Yep. Compressor is shot. Better do condenser too, since its probably contaminated.”

So, I bring it home, have a looksie, and begin some teardown. Then I look in the BIG book and realize that I’m going to have to perform “front end service mode” on the “modular front end”. I’d seen this on video, wasn’t looking forward to it, and figured I’d do it in a few years time when I serviced the supercharger.

BUT the future was now. Err. Then. So, with a heavy heart, I began tearing down the front clip, to make room to extract the compressor and condenser. I mean, how hard can it be? It’s a cute little Mini, right? Here we go: 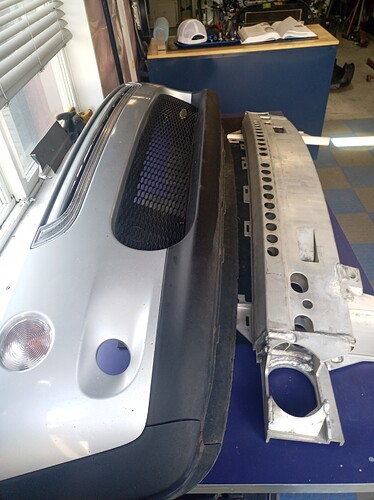 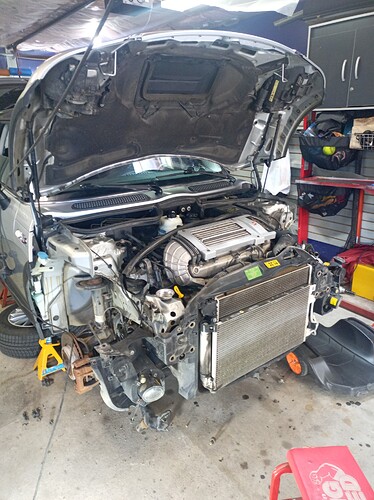 Once I got to here I started glimpsing some sort of crime scene forensic evidence on the front of the block. I HATE leaks. Like all car guys. So, perhaps this was worth a little more digging?

Pulling the Modular Front End (sounds like a couple of wing nuts should be enough to pull the whole thing off, am I right?) allowed me to see a lot more of what was going on. I took my wire brushes and starting scraping. The pile in the tray was go #1. Gross! 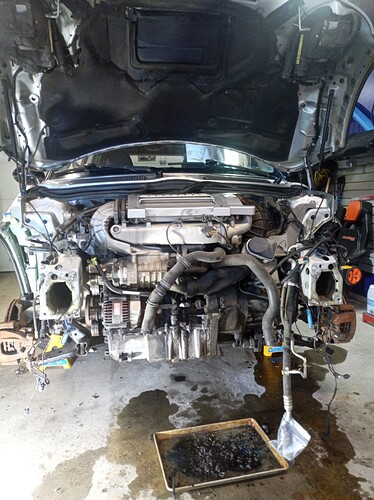 Clearly, I wasn’t going to be satisfied with this. I could see original rad hoses hiding in there, plus weeping water pump, leaks at the cam sensor, dipstick tube, etc. Grrr. Better go deeper. At some point, I realized the supercharger was going to have to come off to get to some of those hoses. And in that case, why in the hell would I pull it, if I wasn’t going to service it? (S/C’s have two oil sides, and I’d have to have it on the bench to change both). 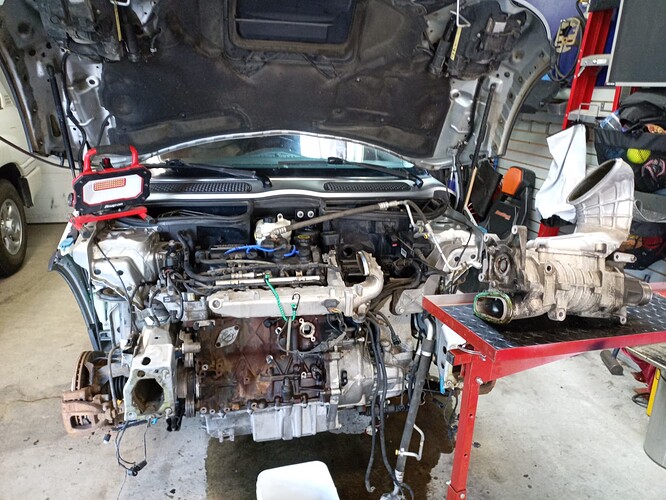 At that point, the waterpump was exposed, along with some other bits and bobs.

So was the rusty block. And the brake calipers looked neglected too. You can see where this is going. A black hole which I was quickly getting sucked into.

Before I know it, I’m painting things, and polishing bolts, etc. How did I get here? 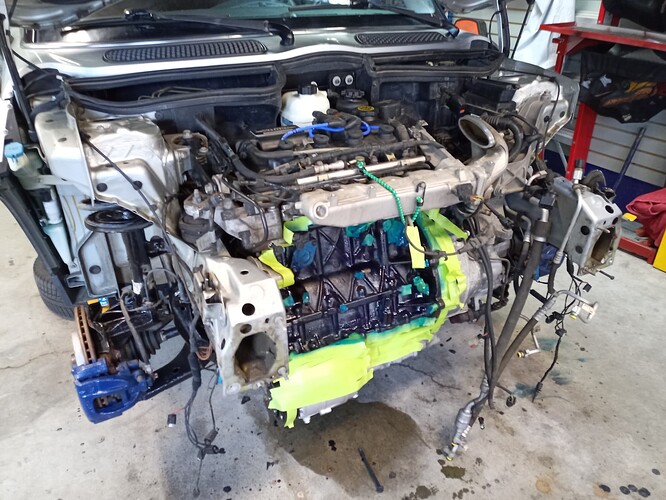 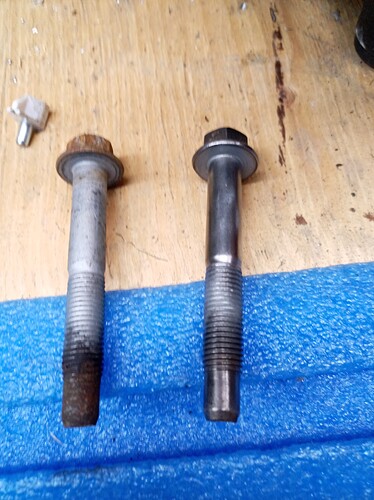 Here’s what I’ve got in the queue:

Once parts come, I start the reverse process of reassembly of the “MODULAR” front end etc…

AND THEN A/C recharge, right back where I started.

LOTS AND LOTS of cleaning.

Damn. Lots of all caps. Some angst here, I can sense it. At least my endless quest for maintenance will be somewhat satisfied, although I really wanted to do oil pan and valve cover gaskets. And those valve cover bolts looked a bit weathered. And the front spindles could use a powder coat. Hmmm…

Didn’t think this car could get any smaller, but little did I know: 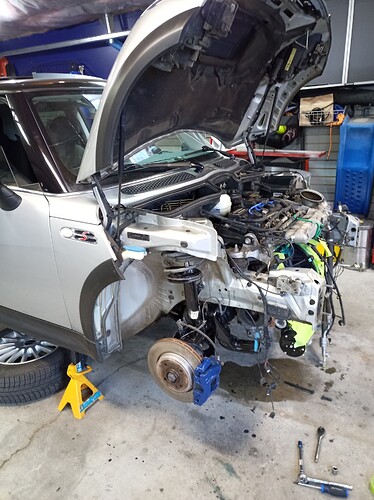 OMG dude. What that first step. It’s a doozie.

That thing’s gonna rip when you’re done with it. Might be on snow tires by then, but it will rip!

Shes all back together. A/C worked for a day but is now leaking at the suction hose that was the one thing i didn’t replace. Damnit. Gotta come apart again.

Oh well. Learned a pile, and other than the A/C there are NO MORE LEAKS. At least, not so far. No more messy coolant sludge, no more oil weeping from a dozen orifices.

And… my first two days driving it yielded a nice surprise - fuel economy is better than expected, at least acc to the onboard computer. I’ll test that when I fill up, but its claiming 6.5L/100kms! Which is 35mpg. From something that has power and handling AND fun? I’ll take that!

the one thing i didn’t replace.

A Facebook friend of mine just posted this up about their MINI. I had to chuckle. But hey, it happens with all cars!

This has been cracking me up for 24 hours now. Love it.

Did you need to lift the Trek for those rollers? WhAt SiZe TiReS cAn YoU fIt?