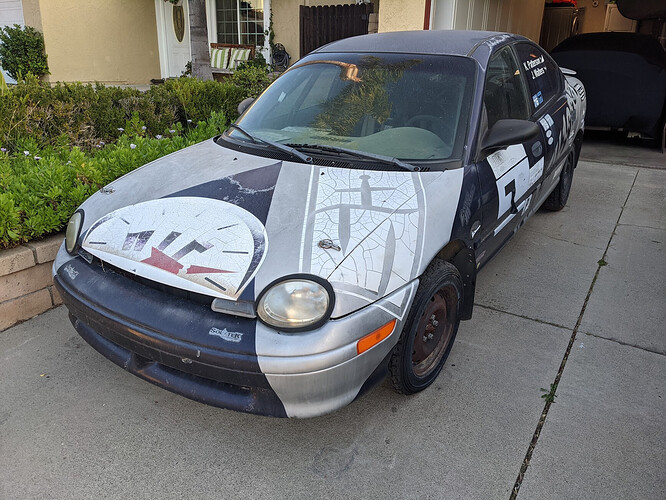 I haven’t seen this car in how many years?

Unlisted for now, but let’s have a look shall we? (EDIT: Live now)

How long has ZE NEON been gone? Has it resurfaced in competition yet? What’s the plan for this one?

How long has ZE NEON been gone? Has it resurfaced in competition yet? What’s the plan for this one?

Sold the Red P-car just before moving back to Orange County (3 years ago), it just recently changed hands again and is now with the guy who heads up the CRS Rallycross program - so I expect to see it out and about post-pandemic.

This one I took off (Previous Owner’s) hands 5 years ago - so it’s be in a field for a while.

He couldn’t find the title, and I didn’t have time to take care of it - and so it sat.
I finally sorted the registration and title last week (Owner had to get paperwork to a notary. Also my AAA membership paid for itself re:2020

) and got it down to the house yesterday. Now that I OWN it “officially”: My plan is to clean it up and sell it OR have a scrapper just come pick it up. Also - did I mention this car has rabies

Thinking about doing a YouTube rallynotes.com series about it.
What do you guys think? 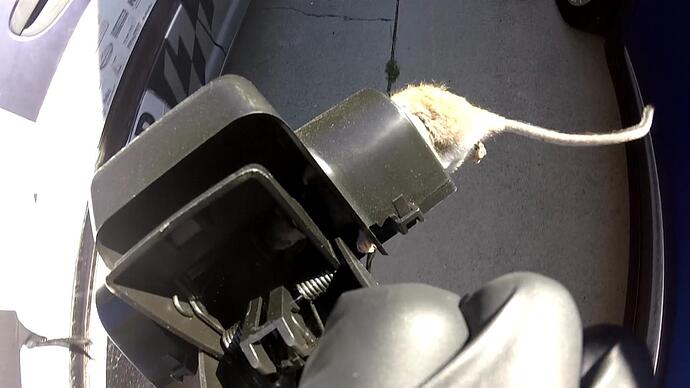 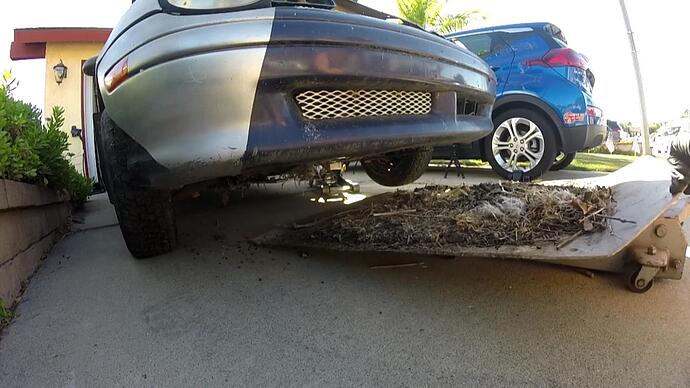 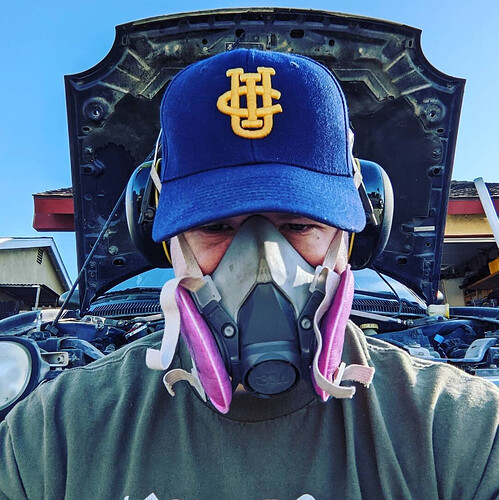 Ree. Dead mouse? You were being literal about rabies!

If you caught our last video you know that we’ve collected an old project car that’s been sitting in a field for about 5 years. A bird, some mice, and many other creatures seem to have taken up residence in the Plymouth. Chewed bits, droppings, and UV have taken their toll, but all is not lost - we’ve got a super beefy roll cage that was built for future regulations, a TeraTrip rally computer, maybe salvageable Cobra Seats, a “run when parked” SOHC 2.0L, and a set of Bilstein inverted struts.

I did make a joke about rabies, but seriously, you don’t want to breathe any of this stuff in. After I dropped the front skidplate - I put on a respirator. I “evicted” the current tenant, and slid the contents of his grass home into a contractor trash bag. There are some tricks to keeping animals out of cars in the driveway, but really, all bets are off once it spends a year in a field.

I was anxious to see if I could get this skittle started, and first had to tackle a hastily added in-line fuse which the solder had let go a long time ago. I did a quick plumbing torch repair job on it.
I had success starting this car in 2015, but once I had power, I turned the key and got nothing from the fuel pump. After getting under the car and checking that the wiring wasn’t chewed, and that I HAD power going back there - I attempted to smack it back into life.

Soo - Time to drop the fuel tank! The Neon tank is held in with only two straps, so really the struggle is the connectors, the 22 year old hoses, and letting it down with 1/4 tank of bad gas. Once the filler tube is free, if it tips off the stand, it’s going to splash, so always take precautions, gloves, goggles, and have a fire extinguisher handy before you even start something like this.

The fuel pump is inside the tank, and unlike most cars of the day - it’s not only not accessible from the top, the pump is in an assembly we like to call “the baby” that fits up inside the tank at a downward angle. You could pull it from the tank while on the car, but it would have to be completely empty. The only efficient and safe way to empty a fuel tank is to have the internal pump - pump it all out. That’s why we’re just dropping the whole thing.

Okay, now to get 5 year old “fuel” out of the tank and into a safe container. If you look online there are “transfer pumps” available, but this transfers gasoline from a container INTO your tank. I didn’t really want to reverse engineer one of those - so I kept it as simple as possible:
A 12V fuel pump and 10 feet of fuel hose. I re-used the existing fuel filter - just to keep the bits of debris out of the future lawnmower fuel. I really should have put the filter before the pump, but I wasn’t sure it was going to pull a vacuum and prime with the filter in the way. This was all done with the garage door open and plenty of ventilation. That little battery pack is a 12v LifePo4 that’s handy for powering time-lapse camera sliders and fuel pumps.

That little pump made quick work of it, and I rescued 2.5 gallons of fuel from the tank.
This is what “the baby” looks like - it’s got the pressure regulator, the level sensor, and the pump as par of it. I used isopropyl to clean and dry the tank and ordered a new assembly. One thing I forgot to get was a new fuel filter, so that’s on order.

Since “starting it up” was going to be a few weeks down the road it was time to get it into the garage. I have a Harbor Freight chain hoists that can sit on the top of the pole that’s at the end of everyone’s garage that prevents you from driving into the dining room. Some of you might be like - why didn’t you just push it into your garage??
Well - garage is sloped, and the driveway has a good 10 degree angle to it - and since you probably don’t know what it’s like to push a 2700lb car on rally tires, it’s hard to do that and squeeze it perfectly into a “two car” garage.

This reads like an adventure, and you haven’t even started the bad boy yet. I’m now invested! Love it!

Nice to see there was no trespassing involved in this rally Neon fuel pump repair.

Keep the updates coming! This is the way.

I’m digging these. Your production values and whatever it’s called when you let the audience in on the jokes are on point.

Also, I just went to insert a race car driver emoji, only to discover there are none. Strikes me it would be cool if I actually KNEW the rally drivers in our emoji library. You know, if you were so inclined to get itty-bitty.

The amount of shit you shoveled out of that engine bay. And what was in the exhaust amirite? It’s really cool seeing that car again. And seeing it running.

Idea: You might preemptively answer questions about upgrades when dealing with stock parts.

Why didn’t you have a fuel cell and an Aeromotive 1000lph fuel cannon on your race car? When is that maybe appropriate? How doth the lowly P-car shine on the budgetary front, ya know? These could be good ideas hinting at future episodes.

On this episode of the Purple Plymouth Project, we’re doing the origin story. Where we came from, where this car came from, and we’ll finish it off by hopefully answering the number one question I’ve received for years:
BUT WHY A NEON?!
2 Likes
Brian December 23, 2020, 2:38pm #14

Ummm, because it’s a legit race car platform with its own spec series?

Loving these. They take me back.

Also, can we do some math? Two rally cars in the garage and how many (newer/nicer) machines in the driveway these days? I love your priorities, here.

Now might also be the time to start thinking about who will be the camera car for the two rally neons playing cat and mouse in SoCal traffic and dirt roads.

On this episode of the Purple Plymouth Project, we talk about parts of the roll cage, what makes it safe, and what changes we’re going to have to do to bring it up to spec for rally racing.

Very nice, dude. I really like the pressure washer setup.

I’m also curious how and where you find your music–and how you license it.

Little trick buried in YouTube Studio, on the left there is a tab for “Audio library”, full to the brim with free video music. 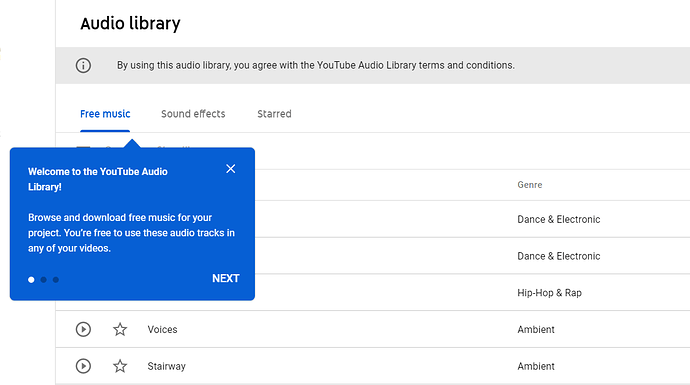 Well, gee, that’s certainly convenient. I had no idea. Makes sense though.