What would become my all-time favorite adventure platform and life-long obsession started out on a whim. I’d finally “made it,” or so my barely-drinking-age ecstatic-about-not-being-homeless freshly promoted to IT Director self thought, and I wanted a comfy ride to match. Long gone were my rock crawling Jeep days—a modest 2wd Ranger (with the “off road” Edge package) had carried me and all of my belongings through some dark times, and done so without complaint in spite of 25k miles a year and zero maintenance, so I’d been shopping the nicer offerings under the Ford umbrella.

Crunching the numbers on paper I narrowed it down to a Lincoln LS or Mark LT (an F150 with Lincoln interior). I was half-way to the dealership to put a down payment on one or the other when I spotted a green oval all on it’s own just off the interstate. I’d driven a few Land Rovers in the past and found them to be slow-but-comfy, but didn’t pay much attention then and hadn’t even considered them in my search. Since technically they were part of the Ford family I figured I better stop and see what they had to offer.

Pulling into the lot, the unusual roof line of the Discovery immediately caught my eye. Sliding into the driver’s seat it felt as if it had been custom tailored. Taking off up the onramp it chirped the tires grabbing second…all four of them. Every detail a perfect asymmetrical oddity. It was love at first drive. 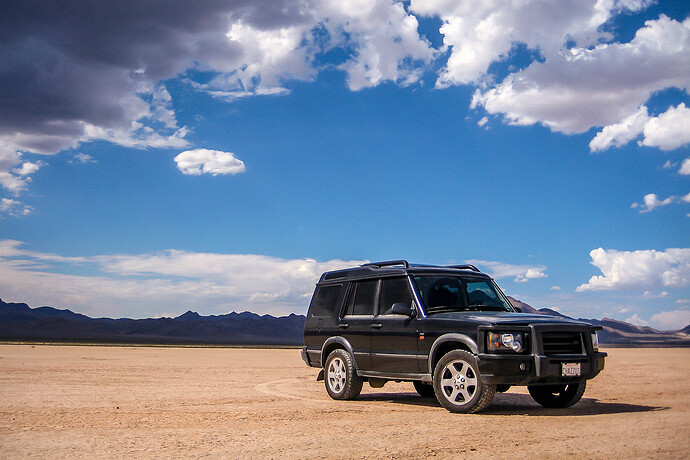 Fortunately, all those oddities carried over into the numbers and added up for me on paper: it was the same price as the Lincolns, could tow and carry more than the LT, and was more comfortable than the LS. It’s a quirky beast, especially by 90’s and 00’s standards: aluminum body, fully boxed frame, 1,500-lbs payload capacity, 7,700-lbs tow rating, optional third-row seating, a petrol V8 making just over 200 horse but nearly 300 torque, and a 375+ mile range…all wrapped up in a lanky mid-size package.

2004 was the last year of the Discovery as we knew it, and indeed the last year of body-on-frame solid-axle Land Rover to grace our shores. Often, when a company is owned by a “competing” brand who’s chosen to end a vehicle’s manufacturing run, the last model year is just another year at best…and sometimes they just let everything slide. This was not the case for a Ford-owned Land Rover—they wanted to send off the Discovery at it’s best.

There is a backstory here with Ford’s modernization program forcing early retirements, a sudden drop in an already infamous quality thanks to the unwritten knowledge gap, and Ford’s generous efforts to make right the wrongs they’d done, but I’ll spare you the details. In a nutshell, each Discovery had been essentially hand built on well-worn machines by blokes that had been around for decades, guys who knew all the little tricks to manually reaching a good fit-and-finish that weren’t in the manual. (This is why the door off a 1999 won’t fit quite right on a 2000 or 2004…the tooling had worn down more and it wasn’t “leaned on” the same way.)

For 2004 Ford brought the OG’s back in, and thankfully they took it as a point of pride to “show 'em how it’s done.” 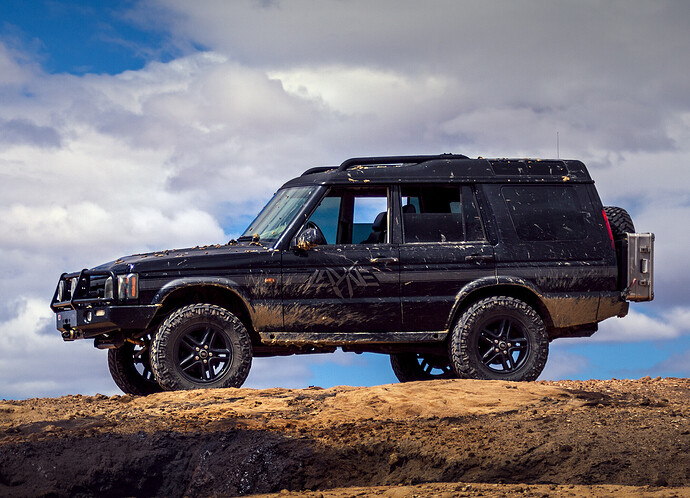 TLDR W.I.P. in no particular order:

(And yes, it’s higher performance and not completely atrocious gas mileage is a significant factor in abandoning the H6 Forester project, which also would have required premium fuel and only gotten around 20 to the gallon.)

Love this, and look forward to the updates! It’s up there on my iconic 4wd list, with some esteemed company.

Ulysses gets better than 20mpg?

This truck is a beast. I look forward to seeing it in action again in 2021.

Ulysses gets better than 20mpg?

HA! I wish. It does 16+mpg fully loaded—way too close to an H6 Forester’s 20mpg to justify building another dirt machine that’s slower, less comfortable, and can only handle about 500 pounds of gear (including tools and mods).

I’m curious to see how it will do with the two-pounds heavier and half-inch taller, but half-inch narrower tires…especially if I switch to an AT tread. I actually saw an increase in performance (significant) and economy (slight) when I moved from the 265/75R16s (32s) ATs up to the 285/65R18s (33s) MTs, but that wasn’t a fair comparison as the larger alloy wheels weighed less than half what the 16" steelies did. (I think the tires might have weighed less too, those ProComps were way heavy.)

The guys across the pond are seeing 24-25mpg from the original TD5 riding on the same (and larger) tires. Add to that the factory optional diesel cabin heater (completely independent of the engine) and the possibility of a 45-gallon fuel capacity with LongRanger tanks, and the idea of having a half-cut shipped over is pretty tempting.

I hear ya. 4m40 diesel, 5-speed manual, AND long range tanks get me thinking the same thing for Fezzik. The current 300-350 mile per tank range is a bit of a buzzkill.

Interesting about the wheels. I thought steel was the hot setup for “Real Overlanding

” because you can pound it back into shape instead of it breaking.

Thoughts on the intersection of steel redundancy, alloy weight reduction, and forged strength? Everything else being equal, what would you run?

I thought about that too when I first went steel, but it’s all nonsense. An impact harsh enough to damage a (quality) alloy wheel would also damage a steel wheel. In fact, modern alloys are actually much tougher to bend and break than steel, because science. I bent the steelies doing some pretty light wheeling in the Forester, that’s why I had to replace the wheels. Years of abuse later those alloy RS wheels are still straight and true…and you know I beat the crap out of that car once it was done with the “overland” scene.

I’ve jumped the Discovery unexpectedly and harshly—fully loaded with a week of gear and supplies, hit a hidden rut across the road at speed and launched it. It actually bounced back and forth between the front and rear tires a couple times when we landed, but I’ve never bent or broke an alloy. I also prefer the way they handle rock rash: much less dangerous edges, a lot easier to smooth back to an acceptable finish, and no rust worries if you can’t get to it right away.

There are legit exceptions for steelies, like higher load bearing capacity for commercial/industrial applications, or specialty needs like beadlocks on rock crawlers. But, for most folks the only reasons to go with steel are looks and budget, and with so many OEM alloy options readily available second hand, budget isn’t a great argument.

With wheels it comes down to the manufacturing methods mostly. The only way to cheaply mass produce steel wheels is forming sheet. It gets stamped and welded into shape. You are left with material that always has a thin cross section. Just fine for some loads but not all of them.

Aluminum is more readily cast or molded into any shape at scale because it’s melting point is so much lower. So you can design the appropriate thickness everywhere and avoid weld joints which are always stress concentrations.

In a pure tension or compression load steel is one of the best materials (assuming we are talking about high carbon or alloy steel, some of the mid to low carbon stuff is very weak, much less than the standard aluminum grades).

But once you add in bending or torsion loads and factor in manufacturing, now the problem is a LOT more complicated, and aluminum has a chance to win.

But truthfully, we’d probably make nearly everything out of titanium if we could

Would you guys like a legit science lesson and example on steel vs aluminum? I could write that up pretty easily.

Agreed on the hype of steel being field fixable. I have never ever broken an aluminum wheel. I have had to file the edge a handful of times, but that was the extent of it. And I tried. I once hit a deep rut on a diagonal that was hidden by snow. Faster than I should’ve too. I actually blew three tire beads at the same time. But no wheel damage. I’m not against steel, but like you guys, I don’t buy the argument that it’s inherently better.

Going slightly sideways on diesel versus gas… wait. Hmm. I believe it’s so far sideways that I’ll create a separate thread rather than derail this most excellent built.

If I could find titanium wheels…OMG

(And you’ll always get a “yeah” from me on write-ups, science is fun!)

There’s very little info on the internets, I actually learned of it from flipping through the RAVE (Land Rover tech manual):

Yep, exactly like an Espar, but OEM. It bolts right into one of the many empty brackets, the controls drop right into one of the many blanks on the dash, and plugs right into one of the many “extra” plugs and wires in the factory harness (it’s a Land Rover thing, all wiring and most brackets for all possible options are already on all vehicles). I wouldn’t be surprised if I could just get the parts and add the 10L LongRanger aux tank for some diesel storage. Total conversion starts to get real appealing when I think about adding a diesel cooktop too…I’m imagining an entire campsite powered and heated by the same fuel source that got me there.

Oh I could get them made, but I’d guess the price tag to be somewhere in the neighborhood of a years salary

Thanks for the thoughtful replies, gentlemen! Appreciate it. Consider me cured of the field-fixable, steel wheels hype. Hooray! Gets me thinking about how I’m tired of the 31x10.5/15 BFGs currently on Fezzik and how they’re getting long in the tooth and how new tire time is an excellent time to consider new wheels, too…

PS: Yes, please, on the technical writeup. Our vehicles have all kinds of interesting metallurgical applications and I think it would be excellent to learn a little more about a little more.